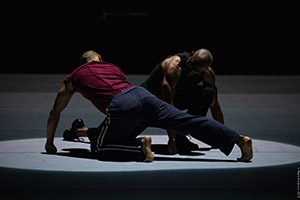 In this world premiere, co-commissioned by the Center for the Arts, Bill T. Jones examines group identity and its relationship to aloneness set to spoken word and live music. What Problem? includes three thought-provoking sections: Jones in solo performance; Jones alongside members of the Bill T. Jones/Arnie Zane Company; and, in conclusion, Jones and the company onstage with participants from the greater Northern Virginia community. For more than 35 years, the landmark Bill T. Jones/Arnie Zane Company has revolutionized modern dance while exploring issues of identity through social commentary. Lauded as a groundbreaking leader in modern dance, Bill T. Jones is the recipient of the National Medal of Arts, MacArthur Genius Award, Kennedy Center Honors Award, and multiple Tony Awards. Witness this new project in its official debut performance at the Center.

Please note: This program may include mature themes and subject matter.

Join Bill T. Jones on Stage in a World Premiere!

The Bill T. Jones/Arnie Zane Company will be putting the finishing touches on a brand new work the week of January 27, 2020, and invites you to join them on stage. Learn More

Town Hall with Bill T. Jones: A Conversation on Community, Identity, and Art

As part of the company’s weekly residency with the Center for the Arts, Jones will be hosting a town hall discussion open to the public. Learn More