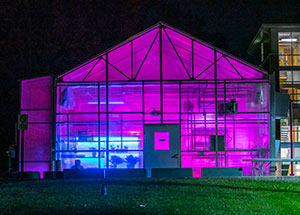 Arcadia is an environmental public art installation on George Mason University’s Fairfax campus, which features a stream of ever-changing music and light generated by the natural biorhythms of Virginia native plants. The creator Sam Nester, who is an accomplished trumpet player, will be using the music stream to create a concert of pieces inspired by the sounds being produced by the installation. In addition to his own playing, this performance will feature The Brass Project (brass ensemble),

In the meantime, please enjoy this introductory video to the Arcadia installation on Mason's Fairfax campus:

The Brass Project is a six-member ensemble based in New York, specializing in premiering new music. The ensemble includes graduates of The Juilliard School, Curtis Institute of Music and Yale School of Music, as well as former members of Carnegie Hall’s Ensemble Connect, Finnish Radio Symphony, Malaysian Philharmonic, and La Orquesta Filarmonica de Sonora. Over the last three years, the ensemble has commissioned 35 new works by both established and early career composers. The ensemble is committed to invigorating brass chamber music through vibrant performance and fearless exploration.

Izzy Gleicher is a member of International Contemporary Ensemble, Ensemble Echappe, and the hip-hop band ShoutHouse. She has premiered works by Steve Reich, Missy Mazzoli, John Zorn, Beat Furrer, Augusta Read Thomas,and Dai Fujikura. Her work has been featured by the Guggenheim Museum, Music of the Americas Society, Park Avenue Armory, the Clark Institute of Art Celebration of Helen Frankenthaler, and the American Academy of Arts and Letters.

Kirk Knuffke is a cornetist and composer who studied with Ornette Coleman, Art Lande and Ron Miles. His work has been acknowledged by NPR’s Best Jazz Album of the Year, DownBeat Magazine’s “Rising Star” critics poll, and was named one of New York City’s Busiest Musicians by the New York Times. Time Out NY called his work a “perfectly balancing sly groove and meditative exploration.” Kirk is one of this generation's most exciting and unique voices in improvised music.

Clara Warnaar is a percussionist, composer, and sound artist who performs with the International Contemporary Ensemble and American Modern Ensemble. Recent premieres and recordings include: Ted Hearne (PLACE), Ingrid Laubrock (Contemporary Chaos Practices), Missy Mazzoli (Proving Up), Steve Reich (Reich/Richter) and Ellen Reid (Run/Playground). As a film musician, Warnaar has appeared on the scores of The Fate of the Furious and Teenage Mutant Ninja Turtles, as well as Willy Wonka Live at the Hollywood Bowl.

Julius Schwing is a guitarist and composer based in Tasmania and founder of Isthmus Music. Julius participated in the Banff International Workshop in Jazz and Creative Music with Dave Douglas and Vijay Iyer. He worked with Calcutta-based saxophonist, Aakash Mittal, to compose works based on improvised, microtonal music, and Indian classical rhythm, for subsequent performance in New York. He recently premiered his first string quartet as part of the Queen’s birthday at Government House in Hobart. He has twice been nominated for the Freedman Jazz Fellowship, one of Australia’s most prestigious jazz awards.