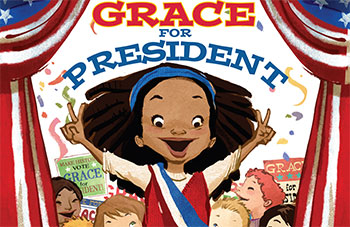 Book, Music & Lyrics by Joan Cushing
Adapted from the book Grace for President by Kelly DiPucchio; Illustrations by LeUyen Pham

When Grace, a spunky elementary school student, learns that there have been no female presidents of the United States, she decides to take matters into her own hands. “What a star-spangled idea, Grace,” her teacher exclaims, encouraging Grace to run for class president. And thus, she is thrust into an adventure of the American election process. Based on the book by Kelly DiPucchio with illustrations by LeUyen Pham, this musical stage adaptation by Joan Cushing is a great introduction to how presidents are elected while teaching the value of hard work, courage, and independent thought. Recommended for ages 5–10.

Run time: 60 minutes with no intermission

The 4 p.m. performance of Grace for President will be sensory friendly.