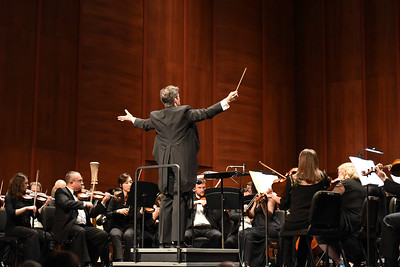 This concert excerpt will premiere on the Hylton Performing Arts Facebook and YouTube pages on Thursday, July 23 at 5 p.m.

The Manassas Symphony Orchestra (MSO), under the baton of Music Director James Villani, is the winner of the 2015 American Prize for Orchestral Performance and is one of the Hylton Center’s original community Arts Partners.  Join us for this powerful MSO performance of Tchaikovsky’s Piano Concerto No. 1 in B-flat minor, Op. 23, taken from the orchestra’s March 2018 Silver Jewels Concert.

This concerto features soloist Carlos Alberto lbay, a classically trained Filipino-American concert pianist and heroic tenor from Fairfax, Virginia who has been blind since infancy. He began playing piano when he was two years old and began singing at the age of three. A child prodigy, lbay made his first public performance at age ten. Fluent in seven languages, he is a versatile performer who has performed in over a dozen countries. lbay made his debut at Carnegie Hall on October 1, 2005 and has performed for Vice President Al Gore, President George W. Bush, and Pope Francis and regularly performs at local venues, churches, fundraisers, and private events.