Mason in Rags: Bringing a New/Old Musical to Life 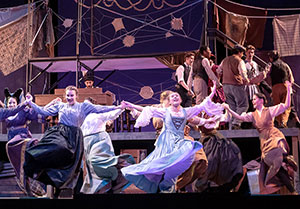 The musical Rags had its debut at George Mason University in Fall 2019, when a group of young actors, faculty members, and alumni worked directly with the original librettist, Tommy Thompson, and reimagined this “old” musical anew. Join various members of the creative team and cast in this Facebook Livestream conversation as they discuss the behind-the-scenes process and mounting of this powerful musical.