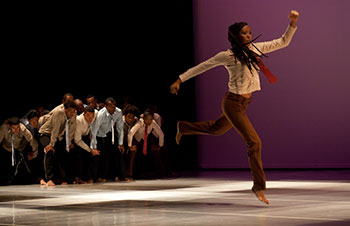 The City of Others

Through the lens of Afro-Colombian dance, The City of Others explores racism and social disparity in Colombia, a country home to Latin America’s second largest population of people of African descent. This dance style draws from capoeira, contemporary dance, hip-hop, and African forms, and is accompanied by live drumming and singing. Based on company founder Rafael Palacios’ own experiences, this stirring work of dance theater calls for the city to be a place of coexistence—a place for everyone, not only the few. We dance, more than to be seen, to be heard,” Sankofa Danzafro’s motto proclaims and the company is making a name for itself in the realm of dance and social change. The company has performed throughout the world and was recognized by the United Nations for its “good practice of Afro-descendant social inclusion in Latin America.” The New York Times said, “[A] revelation . . . an episodic work about urban struggle and resilience combining elements of hip-hop and Afro-Colombian dance.”

Run time: 60 minutes with no intermission