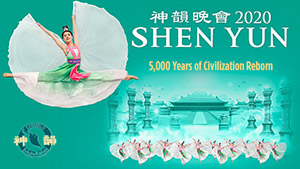 This epic production immerses you in stories reaching back to the most distant past. You’ll explore realms even beyond our visible world. Featuring one of the world’s oldest art forms— classical Chinese dance—along with patented scenographic effects and all-original orchestral works, Shen Yun opens a portal to a civilization of enchanting beauty and enlightening wisdom.

Traditional Chinese culture—with its profoundly optimistic worldview and deep spiritual roots— was displaced by communism in China. Today, only the New York–based Shen Yun is keeping this precious heritage alive on stage. And it’s an experience that will take your breath away.

Based in New York, Shen Yun is entirely non-profit. Its artists have come from around the world to revive this glorious heritage. Since its establishment in 2006, the company has become a global sensation, performing for over a million audience members around the world.